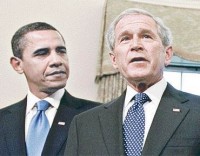 House Speaker John A. Boehner (R-Ohio) blasted President Obama on Thursday morning, asserting that rather than addressing the deterioration of Iraq, he is “taking a nap.”
“It’s not like we haven’t seen this problem coming for over a year,” Boehner said. “They’re 100 miles from Baghdad, and what’s the president doing? Taking a nap.”
Boehner, however, stopped short of calling for U.S. airstrikes against the insurgent groups, telling reporters that he was not yet knowledgeable enough on the situation to advocate specific military action.
The Iraqi government is on the brink of disintegration as al-Qaeda-inspired fighters sweep through northern Iraq toward Baghdad, thrusting Iraq back into the foreign policy spotlight.
On Thursday, other congressional Republicans also struck out at Obama.
Rep. Adam Kinzinger (R-Ill.), a veteran who fought in Iraq and Afghanistan, renewed his previous calls for U.S. airstrikes and said that he believes Obama has the authority to authorize such strikes without congressional approval.
“Every day that goes by it takes a bigger operation. I think … drone strikes are important, I’d actually call for manned air strikes as well to the extent that’s feasible,” Kinzinger told reporters Thursday morning.
Kinzinger did not call for a reintroduction of U.S. troops on the ground in Iraq, noting that it is not politically feasible.
“If we don’t get involved now and you watch Iraq devolve into the situation of Syria, for instance, you will hasten the day when it will lead to another war somewhere, somehow,” Kinzinger said. “The Middle East is on fire and the Middle East is a very important part of the world.”
Sens. John McCain (R-Ariz.) and Lindsey O. Graham (R-S.C.), their party’s loudest voices for a continued U.S. military presence in Iraq, exited a closed-door briefing for members of the Armed Services Committee on Thursday morning and reminded reporters that they had predicted that insurgents might overrun areas of Iraq.
“Unfortunately, our worst fears have been realized,” he said.
McCain declined to endorse specific U.S. military options to address the growing crisis, but suggested that Obama should enlist the assistance of former military generals and diplomats, including former Gen. David Petraeus and former ambassador Ryan Crocker, who drafted the original plans to invade Iraq and rebuild the country.
“Those are the people that knew how to win and know how to win,” McCain said. “This present national security team is a total failure.”
Graham echoed McCain’s views, but also acknowledged that new military action in Iraq likely would be unpopular with most Americans.
“To the American people, I know you’re war-weary, I know you’re tired of dealing with the Mideast,” he said. “But the people that are moving into Iraq and holding ground in Syria have as part of their agenda not only to drive us out of the Mideast, but to hit our homeland.”
House Minority Leader Nancy Pelosi (D-Calif), pushed back on the suggestion that the U.S. must immediately take military action.
“What’s happening in Iraq is obviously very troubling,” Pelosi told reporters Thursday. “The State Department has said that we are providing some weaponry to the Iraqi government, I don’t think there is any appetite in our country for us to become engaged in military activity.”
She added: “The American people have become exhausted with wars.”