Iraq – but not as you know it. 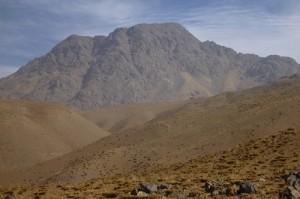 Mt Halgurd is the high point of Iraq. Having been a regular visitor to a country that has had more than its fair share of low points in the past few decades, I leapt at the opportunity to stand on the top of Iraq’s highest peak and see an aspect of this country rarely seen by outsiders.

Mt Halgurd is in the North West corner of the Kurdish region of Iraq, high in the Zagros Mountains that stretch in an arc from the Strait of Hormuz in Iran northwards through Iraq to the Turkish border. Buried under deep snow for much of the year, they are still snow free in October and the ascent of Halgurd, while not a technically difficult climb, is made more demanding by the thinness of the air at 3,620 metres (11,876 feet) and the lack of distinct paths. A local guide is advisable, in our case a former fighter with the Peshmerga, the Kurdish militia that fought a bitter struggle against the forces of Saddam Hussein.

The view from the top is worth the effort, a stunning panorama of mountains and ridges baked brown by the long hot summer even though temperatures at the top are near freezing. North across a deep valley is Iran where you can make out a series of Iranian border posts dotted along the ridge opposite, a useful warning that even in good weather you need to be careful to descend back the way you came and not stray into the hands of an Iranian border patrol, a point not lost on our guide.

Few people climb Halgurd and last week we had the mountain to ourselves. The sense of remoteness is however qualified by the rusty shell casings that litter the summit, a reminder that this border despite its inaccessibility was the scene of fierce artillery exchanges during the Iran-Iraq war. To the North West is Halgurd’s rival peak Cheekha Dar which some claim to be a few metres higher but as it straddles the Iranian border, purists stick with Halgurd as the highest wholly Iraqi summit.

Climbing Halgurd can be done in a long day trip from Erbil, the capital of the autonomous Kurdish region of Iraq. The drive takes you north from the city across the plain and through the Rawanduz Gorge before climbing into the Zagros along the British-built Hamilton Road, named after New Zealander, Archibald Hamilton. Hamilton was a military engineer who spent four years from 1928 to 1932 building this road through the mountains connecting Erbil to the Iranian border to open up a route through to Tehran.

As you get closer to the mountain you leave the main road and wind your way through a series of Kurdish villages many of which have borne witness to the persecution and struggle that the Kurdish people have endured over the past few decades. Life in these remote mountains, for centuries pinched tightly between the Ottoman and Persian empires, has shaped the resilient, resistant nature of the Kurdish character. Their awful treatment at the hands of Saddam’s Baathist regime has only hardened their already profound sense of self-reliance.

In the final village we stopped in before starting our ascent, an elderly lady mistook our small convoy of white four-by-four vehicles for those of a development agency. She rushed out to meet us exclaiming that her house had been bombed by Saddam and urging us to rebuild it immediately. We explained that, on this occasion, we had not come to help her but to climb the mountain at the head of the valley. She seemed disappointed and mystified in equal measure.

But now with the inexorable advance of new roads, electricity and mobile reception these villages are set to share in the renaissance that is underway in the rest of Iraqi Kurdistan. This renewal is centred on Erbil, the seat of the regional government which has, from well before the overthrow of Saddam, steered a delicate path towards autonomy and economic development. Taking responsibility for their own security, they avoided the worst excesses of the violence that has plagued the rest of Iraq.

Erbil is reputed to be the oldest continuously inhabited city in the world, the old citadel in the centre of the city dates back 6,000 years. But today the city that has the feel of a modern boom town as savvy investors have understood that the Kurdish region is way more stable than the rest of Iraq which in turn is still sadly struggling to throw off its reputation for sectarian violence and political instability.

This prosperity is set to grow as the Zagros Mountains – the crinkled fold between the Eurasian and Arabian tectonic plates – give up their geological riches in the form of new oil finds. Previously much of the exploration was conducted by the smaller, more adventurous ranks of international oil companies. But now the oil majors are turning their attention to Kurdistan and its potential to produce two million barrels a day.

Significant challenges remain: relations with the central government in Baghdad remain vexed, not least over how to share oil revenue and the precise demarcation of the border between the Kurdish region and the rest of the country. By contrast, relations between Erbil and Turkey have improved markedly in recent months. But this remains a tough neighbourhood. To the west, Syria is heading towards civil war. To the east, Iran is locked in a dangerous game of nuclear brinkmanship with the United States and Israel. All three neighbours have significant and to varying degrees restless Kurdish populations.

Such tricky matters seem a long way off standing in bright sunshine on the summit of Halgurd, buffeted by the chill wind and tired from the climb. The reverie from being high in the hills gazing out across a rugged landscape that stretches away in all directions into the haze brings the usual sense of calmness and well-being. In the next few years – if the politics continue to improve – these mountains will be an essential destination for all those who love walking and climbing in remote, high places. But today, we are alone and as the late afternoon sun turns the dull brown mountains a richer, deeper shade of ochre it is time to head down and start the long drive back to Erbil and the complexities of modern Iraq.